Collaborative Consumption in the Middle East

Most notably, an evolving shift in thinking towards goods and ownership.  In emerging markets where aspirational thinking has a tendency to skew consumers towards a more conspicuous view of consumption and goods, we’re seeing that economic realities are forcing a much more sober-minded orientation in the way that people think about them.

This shift, in large part is leading to a more functional view of goods and an increased openness to sharing – time, goods and services, which will further help to lay the foundation for collaborative consumption and the share economy in the region.

Arab countries are no different than other countries. There are now three generally accepted ideas as to what is going on around the world’s consumer markets, and can be found in the Arab world:
Ownership

First, there is an ongoing paradigm shift about what it means to own a car, a bicycle, a household appliance, a book, a film or a piece of clothing. The value of a product is beginning to be seen in terms of its use , not in its outright ownership , as per traditional consumer models

Second, there is an increased level of acceptance of used products, thanks partly to the popularity of online platforms for buying and selling used goods.

Finally, people are also adopting what could be called collaborative lifestyles, in which not only are goods shared but people share their time, space and expertise.

In the book What’s Mine Is Yours , Rachel Botsman argues that:  “There are four factors needed for a successful business model based on collaborative consumption: sufficient critical mass, available capacity, belief in the commons, and trust and credibility between strangers”

All of these are present to varying degrees in developing markets such as the Arab Countries, which are collaborative consumption giants in the making. The only unknown is the speed with which collaborative consumption services will emerge and be taken up as an alternative to traditional hyper consumption. Any companies operating in developing markets will need to understand and plan for the potential impact of these services, and consider how to redefine their services to reflect the growing demand for common access to assets. 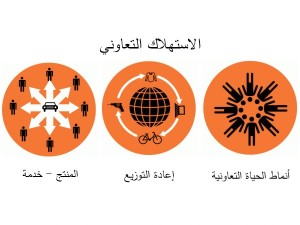 Necessity is the mother of invention.

People in Arab countries with similar needs or interests band together to share and exchange tangible assets like electricity generators which enable companies to offer this good as a service rather than sell it as product. And we can another example in collaborative lifestyle when we share a taxi, with strangers to reduce cost instead of getting a taxi alone and buy more, also the need of finding a cub faster, and reduce the traffic in the city. And now we can see service like Wasselni that helps people find others to carpool with across the region Which intend to start in big Cities like Cairo and Amman. and less-tangible Assets color: such space ( Arabrooms ; Jeddah-based company launched to Provide economy lodging and furnished short-term lease apartments in Saudi Arabia)

Many Arab online Groups have achieved significant success by harnessing the ability of social media to create social connections and credibility in redistribution market; used or per-owned goods are moved from somewhere they are not needed to somewhere they are in some markets, the goods may be free, Which take the form of charity and donation work . In others, the goods are swapped ( Swaphood ) or sold for cash ( Krakeebegypt , Sham Market ).